I completed this checklist directly after the lesson was over instead of during the lesson. I found it too difficult to instruct and conference with students while also trying to pay attention to this sheet. I believe I was able to reflect accurately on what students had done because I completed it immediately after the lesson was over. However, it is important to note that I completed the checklist mostly based on the initial problem exploration and not their completion of the individual worksheets (with the exception of the use of relational symbols). This is due to the fact that students seemed to have the misconception that they couldn't use their strategies during the independent work and I didn't feel that it would be an accurate assessment considering that fact. 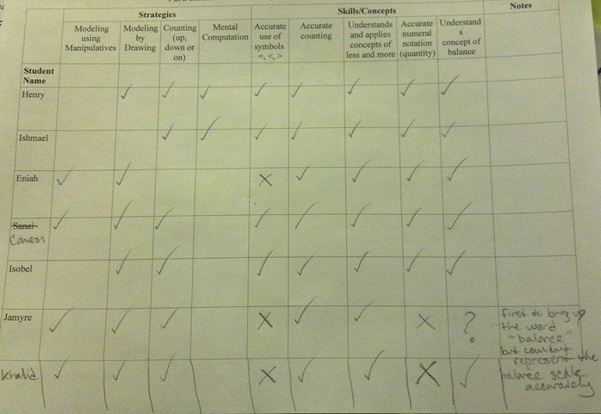 There are a few things I can learn from this checklist. First of all, I noticed that it is important for students to have access to manipulatives and/or a place to draw because only two of my students used any mental computation. Also I think this serves as evidence that half of my students were not yet ready for assigning relational symbols or at least did not have an accurate understanding of them. So I would argue that it may have been better to focus on equality, inequality and balance and not worry yet about greater than and less than. This is an additional concept that would make sense as the focus for a follow up lesson.

I was extremely pleased with the way this lesson played out in our small group. I was able to appropriately engage and challenge each student at the right level of cognitive demand for them. I was also thrilled that they were beginning to be metacognitive about their strategy choices. I heard a couple students talking about not needing blocks or using certain drawing devices to help themselves get started. It got me thinking about how I want to investigate ways in which I can better assess metacognition. Even though I could see and make not of which strategy they chose, I'd really like to be able to know more about why the chose it and how they felt about using it. I think perhaps if I can get more effective at encouraging and structuring discourse related to sharing strategies and problem solving that those conversations would be enlightening for me.

Also this first attempt at problem-centered and inquiry-based learning has made me a believer. The students were invested in what we were learning about and the related concepts far more authentically than if I had started off with direct instruction. I chose to provide a lot of scaffolding though before letting them jump into the problem, such as modeling the problem with the props and introducing the idea of thinking about the problem like a scale balance. I am curious what would have happened if I had truly just set them loose on the problem without all that introduction and support beforehand. My intention was to support them more because they aren't used to problem solving before instruction but I think some of these students might have had creative ways of thinking about the problem that were stifled because I got them started thinking about the problem in a way that I thought would make the most sense to the majority of the students.

I think the pacing of the lesson was off. We spent most of the lesson on the introduction and initial problem exploration and then had a rushed introduction/instruction about relational symbols and a competitive, rushed, independent work activity therefore followed. Next time, I think I will save the relational symbols for a follow up lesson where I can really focus instruction of the symbols now that their concept of balance and inequality is solid. If I had not taken time to introduce the relational symbols we may have been able to do the closing that I had intended to see if the students could think of other real applications of situations for thinking about inequality and needing balance. This would've allowed me to assess if they could apply the concept to other situations accurately.

Lastly, after stepping back from the details of the lesson and thinking about the "residue" that I wanted the students to take away, I feel rather successful in that. The main residue I was hoping for was that students could use the concept of balance to make sense of, understand and define equality. I wanted them to use the multiple models of balance and equality presented to come away with a more relational understanding of equality. This appears to have come across because almost all the students were accurately matching the scale balance drawings when comparing the numbers on their worksheets and in the explanations for their thinking. The term balance was repeated, emphasized and reinforced throughout the lesson with verbal statements, questions, and modeling (see the video below). I believe this will truly help my students to have a better concept of equality and fight the misconception so prevalent at this stage to think of the equal sign as just  a way to precede an answer.

I was very pleased with how students did with this lesson. I am still regretful that I may have overloaded the lesson by also "tacking on" (as my UPenn mentor called it) the inequality symbols. This could be the focus of a follow up lesson and more guided practice with the symbols but also we could just stay on equality for a bit and really make sure students have a relational and strong understanding of the concept and the related symbol. For example we could now move on to focus on when are where we see the equal sign in number sentences and practice creating or filling in the various sentences keeping in mind the new understanding students should have of either side of the sign needing to be balanced. I want to see if we remove the support of the scale visual if they still can accurately and effectively apply the concept to their understanding of a new task. For example, student may still have trouble making sense of situations where the equal sign is not where they usually see it.

I could probably make up some math centers activities that would provide practice with this as well. I also like the idea of introducing them to the strategy of depicting composition and decomposition in the form of number bonds to help them understand how the two side of an equation really are the same (see example below). I would use mostly smaller numbers and differentiate as I did within the lesson I taught. 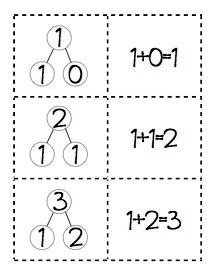