When it comes to science education, I have had some previous experience that positively influenced decisions about my lesson. However, my experience also made it difficult for me to narrow my focus and choose a topic and instructional strategies that would work best for my first grade students at Stanton Elementary. There were two thoughts that immediately came to mind: I wanted my lesson to be hands-on and I wanted to involve a discrepant event. Through my past experience and education gained in the science methods course, I knew these were two sure fire ways to engage students in science. So I began fantasizing about doing a states of matter lesson with the non-Newtonian substance "oobleck"! I dreamed of dye colored water soaking up celery stalks. I remembered fondly the tried and true water drops on a penny activity. I soon brought myself back from the wonderful world of hands-on, discrepant event science and remembered what had happened during the Sink and Float activity I had done with my child study student. Much of our time together had been spent learning how to not just play and splash around in the water. I realized my students at this school hardly ever do science activities and have not yet been taught how to handle materials and be responsible for their own experiments. So instead of jumping into the deep end with messy, material heavy, mind boggling science experiments/activities, I decided to start slow and easy. I wanted a type of investigation that would require them to be like scientists but not require them to follow norms of science instruction that were completely foreign to them. I knew I wanted them to be like scientists both in the classroom and in their own backyards/neighborhoods and then it came to me. We had all just taken a trip to the zoo together and they had been working on animal research projects for weeks now. Most of them were exotic animals like those seen at the zoo. So I settled on a lesson that would encourage them to be like scientists in their own backyards, looking for evidence of urban animals. 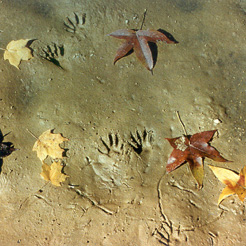 This lesson builds off first grade students' affinity for learning about animals and other living things. The animals emphasized in this lesson are urban animals or living things that these students could likely see in the city of Philadelphia. They will work as a group to compile a list of those types of animals as opposed to animals they may have seen only at the zoo or in books. Most science curriculum about animals emphasizes how we can learn about animals from observing them or learning about their habitats. While this is an important part of any life sciences/biology curriculum. I'd like to focus on what we can observe even when there isn't any animals to observe. In this lesson students will build an understanding that animals often leave evidence (or clues) behind that we can observe and study to learn more about the animals that surround us. The students will think about what type of evidence is left behind (tracks, scat/droppings, feathers, fur, nests, holes, tunnels, scratches, bite/chew marks, bones, empty shells, etc.). They will then think critically about what we can learn from the evidence (what type of animal it is, how big it is, why is was there, what it may have been doing, where it went, what it ate, etc.). Students will practice looking for and thinking about evidence of animals using a class example image. Eventually, some students may start to think about what kinds of evidence they may find in their own backyards or neighborhoods and create their own imagined scene with evidence of the type of animals they might find there.

I designed this lesson as an introduction to the scientific practices of observation and looking for evidence to build a claim. These are foundational skills in science that my first grade students have little familiarity with. I chose to focus on observations and evidence related to animals because they took a class trip to the Philadelphia Zoo a couple weeks ago and are very engaged in learning about the animals they saw there. While I am thrilled that they are engaged in their learning, I believe learning about Zoo animals is not enough. I'd like for my students to realize that there are animals and living things around them, sharing the many spaces in their own neighborhoods right here in Philadelphia. These are animals that they often take for granted or possibly don't even notice because they aren't paying attention to what's in their surroundings. It is my belief that these animals that share the city with us can provide us with opportunities for very meaningful observations and investigations that can sometimes connect to our own day to day lives. This is why I'd like to push them to think about not just the more exotic animals they saw at the Zoo but to take notice of the local animals around them as well that they don't need a special field trip to be able to observe up close in real life. My hope is that this lesson about how we can find evidence of living things and animals in own familiar surroundings will hopefully encourage students to be more observant and appreciative of the local animals and natural world that exists even within the city limits.

Specific types of evidence will be emphasized so that they are motivated to look for specific things when they are outside of the classroom. The activities in the lesson emphasize making observations, looking for evidence, making claims and sharing information. These are all practices that real scientists are involved in. I hope that through this lesson students will see themselves as capable of acting as scientists themselves by modeling these practices and then encouraging them to continue those practices outside of school. It is my belief that students should understand that a scientist is not something you become but something that you already are when you participate in certain behaviors and practices. I am particularly interesting in building in and focusing on scientific practices while also having a content focus due to the new emphasis on a multidimensional approach to science education as laid out in the National Research Academies' Framework for K-12 Science Education.

In this lesson I attempt to use multiple teaching methods and strategies to allow all students an entry point for the activities we are doing. This includes initial shared writing/organizing of ideas, teacher modeling, then eventually shared and independent practice. As first graders these students will benefit also from practicing appropriate classroom discourse. The discussion and discourse also allows me to set up the expectation of students starting to try out meta-cognitive strategies to become more aware of their own thinking and learning. The ability of young students such as these first graders to be self aware and meta-cognitive is of particular interest to me as a teacher-researcher. In a more practical sense, allowing students to form a collective understanding through the sharing of ideas builds a sense of community among the group of students before moving into independent work later in the lesson. Through these various activities students have multiple exposures to the main ideas and objectives so that by the end of the lesson they can have multiple points of reference from the lesson to support the construction of their own learning. The independent practice at the end of the lesson is not only a way for them to apply what they have learned but also to express their identities within the content that is being taught. They hopefully will see this as a chance to see themselves in what they have learned and make the content more personal and meaningful to them in this final activity. 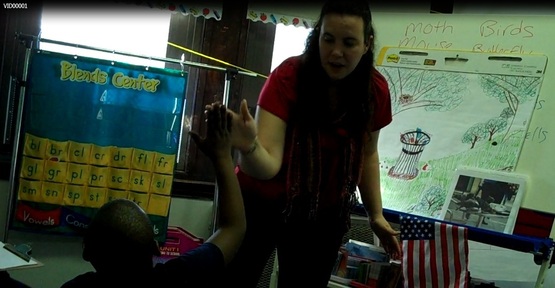 Go to Analysis Page
Go to Observations and Reflections Page